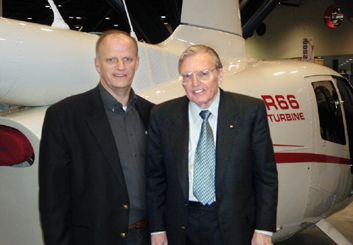 Founded in 1973 by Frank Robinson, today, the Robinson Helicopter Company in Torrance, USA is the market leader in the civilian helicopter industry.

To date, more than 10,000 R22, R44 and R66 model Robinson helicopters have been produced and sold. Every day, the US American Police and Home Security units count on the reliability of these helicopters; there are also numerous helicopter schools and private owners who are overjoyed that they can rely on the experience of millions of flying hours with a Robinson helicopter. This is also reflected in the company’s impressive sales figures.

In 2010, the successful Robinson helicopter range was expanded to include the five-seater R66 Turbine.